(…originally published in the ibooknet newsletter for November 2002)

A brief history of the Royal Naval Patrol Service 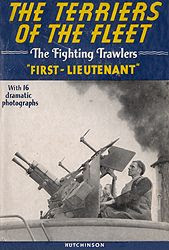 The Royal Naval Patrol Service (RNPS) was a ‘navy within a navy’ during WW2. In 1939 much of Britain’s domestic freight distribution still relied on coastal shipping. The experience of WW1 had taught the Royal Navy that mines in our coastal waters could bring this distribution to a standstill and they recruited to the Reserve many civilian fishermen from the home fishing fleets to act, with their vessels, in a minesweeping role.

At the outbreak of WW2 this reserve was mobilised and became the Royal Naval Patrol Service with a shore base at Lowestoft in Suffolk. Originally HMS Pembroke X (as a subsidiary of Chatham which was HMS Pembroke) it soon became a base in its own right called HMS Europa.

These reservists were similar in many ways to the ‘pals’ battalions of WW1 in that they had known and worked with each other in peacetime and now found themselves facing a new enemy together. Despite some postings in the interests of Naval efficiency, many men swapped their draft chits so that they could remain together – resulting in chaos in pay records and even in some cases, false ‘missing’ notifications sent to next of kin when ships were lost at sea.

Purpose of the RNPS 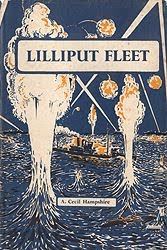 A major role of the RNPS was to keep “the war channel” clear in home waters, a channel which was kept swept through enemy minefields laid off the East and South coasts of the British Isles. In the daytime attacks by fighter-bomber aircraft were frequent and most nights visits by E-boats and aircraft would re-block the war channel with mines. It was the job of RNPS to clear them again – especially hazardous as new types of mines were developed from the traditional contact mine, including magnetic, acoustic and pressure as well as combinations of these types. It could often take the loss of several vessels before it was realised that a new type of mine had been encountered.

The vessels employed in the early days were mainly civilian craft requisitioned for Naval service – trawlers, drifters, paddle steamers, etc. It was not until later in the war that specialist small minesweeping craft such as the Motor Minesweeper were built.Some of the larger trawlers of RNPS were also used in an anti-submarine role. Many of the Atlantic and later the Arctic convoys would have a trawler as one of the escort vessels, acting both as a rescue ship and as a listening post for submarine activity.Whatever their role these vessels were officially only lightly armed, with usually only a 12 pounder on the fo’c’sle and a couple of half inch machine guns on the bridge but many were also veterans of Dunkirk and unofficially sported a miscellany of weapons liberated from that operation. 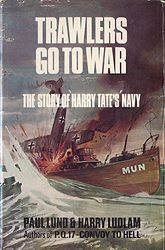 The earliest accounts of the work on RNPS appear in some of the wartime anthologies and are of little interest because the prevailing censorship prevented the inclusion of much factual detail. An early title to look out for is ‘Terriers of the Fleet – The Fighting Trawlers’ written by an anonymous author using the pseudonym ‘First Lieutenant’ and although undated was published by Hutchinson about 1943.

A. Cecil Hampshire was the first to write in more detail in his ‘Lilliput Fleet’, published by Kimber in 1957. In the same year Souvenir Press published Alexander McKee’s Coal-Scuttle Brigade’ about the East coast convoys, the title making reference to the fact that many of the merchant vessels were colliers and coal fired, as were many of the minesweepers. In 1958 Jarrolds published ‘Glory Passed them By’ by Ewart Brookes, an account by the one-time commander of a minesweeping flotilla at Dover who went on to become a novelist.A detailed history by Hilbert Hardy, ‘The Minesweepers Victory’, was issued by the small Kent publisher Keydex in a limited edition in 1967 but probably the best known history is ‘Trawlers go to War’ by Paul Lund and Harry Ludlam (Foulsham 1971), an account told by anecdotes resulting from numerous interviews with members of RNPS, and the sequel which included the ‘pusser’ branch of minesweeping, the RN Fleet sweepers, called ‘Out Sweeps’ (Foulsham 1978) .

There are many references the RNPS in other works, not least by Nicholas Monsaratt in his early stories about his time in corvettes in the North Sea, and a number of other books of reminiscences by ex-RNPS members. The following is a list the titles already mentioned as well as some others that we have come across:

….and our most recent stock can be viewed in our RNPS catalogue and the veterans of the service at the RNPS Association.