Graeme Roberts (only a death seems to prompt a post)

It’s a sad fact of life that you older you get, the less time you seem to have to cover all the tasks you set yourself. As a result this blog has been sadly neglected. This year I have allowed such uplifting events as attending the memorial service for Lord Kitchener in Westminster and talking to the visitors from our twin town of Plaisir about the Royal Naval Patrol Service pass by without comment. Some events, however, are so hard hitting that time must be found. 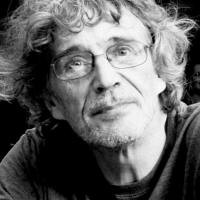 I lost a friend yesterday. Graeme Roberts was a bookseller, a unique one in my experience with a divi’s eye for any sort of collectable book and a vast experience of sci-fi. When I first knew him he was trading as Magpie Books at 53 Brushfield Street, Spitalfields and then at The Clerk’s House at 118½ Shoreditch High Street. Based in the wilds of Suffolk I had known him only remotely since the early 1990’s as a fellow bookseller but I got to know him properly with the coming of the world wide web. The internet gave us much better opportunities for contact, for the exchange of views on books, on bookselling and on the world in general, which had not been possible when buying and selling from each other by post.

In the late 1990’s, concerned with the increasing avarice of some of the major bookselling websites, a small group of us, led by Graeme, explored the possibilities of a cooperative of independent booksellers. That group came into being and briefly flourished but the nature of cooperation was always going to be a difficulty with such independent and somewhat eccentric people as booksellers and it gradually declined.

During this time Graeme had left his roots in the east end of London for West Yorkshire and after a spell near Todmorden ended up at Hebden Bridge. Graeme had some relationship and financial difficulties and I lost touch with him for a while but I am pleased to say that we picked up the pieces again last year and were in infrequent but regular touch. He was due to visit his mother’s grave in Essex and had promised to bend his route to come and stay and be introduced to our local micro-brewery.

Graeme was outspoken, a trait which sometimes got him into trouble but a trait which made him who he was, a genuine man with no pretentiousness. He made mistakes – don’t we all – but he made efforts to correct them and although in his last few years he was probably less financially secure than at any other time of his life, I hope and believe that he was content, amongst some real friends at Hebden Bridge. Rest in Peace, Graeme.

This entry was posted in Bookselling, R.I.P. and tagged Bookselling, Death of friends, Graeme Roberts, Magpie Books. Bookmark the permalink.