The front and back of the original RNPS Silver Badge,
about the same size as an old shilling or new 10p

On delving deeper into the file about the Royal Naval Patrol Service Silver Badge in the National Archives (the account of the discovery of which was first published in the RNPS Newsletter), we find it lays to rest some of the folklore about the reason for the change of design of the Badge, from the original pin type to the later four-eye type, with a rather more mundane account.

Traditionally the reason for the change was that Badges of the original pin type were too easily detached from clothing. So many were being reported lost or stolen, when in fact many were probably being given away as sweetheart brooches, that the design was changed to make them more securely attached. The facts are a little different.

The initial production run in 1940 had been of 20,000 Badges and by late September 1941 the Commander of the Patrol Service Central Depot, Commodore Daniel de Pass, anticipated that the supply would be exhausted by the end of the month and he requested the Admiral Commanding Reserves for the supply of a further 10,000. He also noted that it was possible that there was ‘a certain amount of trafficking in these Badges’ and suggested that future replacements, which could be obtained for sixpence, should be noted in the rating’s pay book with the date of issue, date of replacement and issuing signature.

Certain minutes seeking Treasury approval then follow until a letter from the Royal Mint on 31st October which states that while there is no problem with producing the Badges, the contractors who supply the pins and catches are having difficulties in obtaining them. The reason for this is not given but it can only be assumed that the steel for pins is of a high quality, and it is known from other sources that high quality steel was in short supply and probably reserved for more warlike purposes.

Before the difficulty in the supply of pins and catches was resolved the Commander Minesweeping – Peterhead, Cdr. J. P. Dobson, submitted a suggestion, on 20th March 1942, that because of damage to clothing the Badge be remodelled with two eyes so that it could be sewn to the sleeve. This was amended to ‘four small loops’ by the Flag Officer-in-Charge – Aberdeen, so that the Badge would lie flatter, and submitted through the Commander-in-Chief – Rosyth to the Secretary of the Admiralty and recommended for the concurrence of Their Lordships, a copy being received by the Silver Badge Office at Lowestoft on 30th March 1942. There is also a copy of the concurrence of Commodore Daniel de Pass with this proposal. 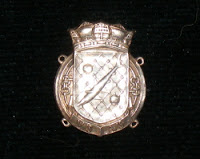 The later version of the RNPS Silver badge

Not surprisingly with such support subsequent Badges were produced to this new pattern with four eyes which overcame the problem of the shortage of pins and helped to prevent damage to ratings’ clothing. By 25th August 1942 there is a note that an initial supply of the new style Badges has been received at Lowestoft.

There is correspondence in the file between the Naval Branch at the Admiralty and The Treasury about the recall of old style Badges for exchange for the new, which was eventually agreed but only on a voluntary basis. Also in the file is a new Admiralty Fleet Order dated 3rd September 1942 amending the description of the Badge and specifying that it is to be sewn onto the sleeve, and on 4th March 1943 a new AFO incorporating the old Orders specifying the qualification for receipt of the Badge as well as the new description.

As a matter of interest the initial production of 20,000 Badges had been achieved at a total cost of £569.00, of which £329.00 had been for the silver bullion and 50 guineas (1 guinea = £1.05) the design cost paid to Kruger Gray. There is no record of whether the cost of silver bullion had risen by May 1942 when the new style Badge was produced.