‘A Passage to Sword Beach’ by Brendan A. Maher 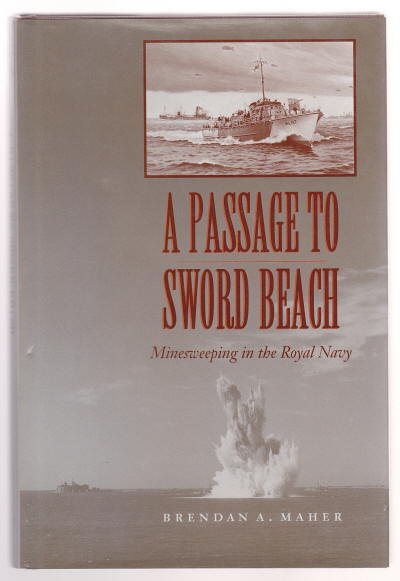 A Passage to Sword Beach

One of the joys of selling second-hand books is the opportunity to read your stock. When cataloguing I try to summarise the content of all our non-fiction but occasionally you come across one that you dip into and just can’t put down. Recently one such was a really excellent memoir of naval experiences of WW2 that appears to me to stand head and shoulders above many others. It is a relatively recent account by an ex Royal Navy Officer which, sadly, does not appear to have been published in this country.

Normally I am wary of recent accounts of events that took place fifty years ago. There have been many memoirs written of WW2 in the last twenty years but time and an ageing memory do not always make for an account that can be relied on too heavily as the memory can play tricks. With this book, however, the author had two original sources of notes made at the time to help him.

Brendan A. Maher lived with his parents in Eccles, a suburb of Manchester, where his father was headmaster of a local school. He applied to join the Royal Navy shortly before his eighteenth birthday in September 1942 but a slight stammer meant that initially he failed. It was explained to him that in the heat of battle verbal orders had to be passed quickly and correctly. He practised his speech control and applied again a few weeks later, this time successfully, passed his medical in December and was accepted.

In February 1943 he was ordered to report to the shore based training establishment HMS
Raleigh, in Devon, for his basic training. Here he was issued with his ratings uniform and
received instruction in drill, seamanship, signalling, gunnery, etc. He completed the course successfully and with his educational background was evaluated and selected as a CW candidate, a potential officer. In the meantime he held the rank of Ordinary Seaman and after his training and a short spell in barracks at HMS Drake at Devonport he was posted to the light cruiser, HMS Cardiff. Here he quickly learned about the lower deck, of ‘piped’ orders, hoisting the ship’s boat, mess catering, the daily ‘tot’ of rum (that the others had, he was too young), how to sling his hammock, etc., until July when he was posted to HMS King Alfred for training as an officer.

On passing out from his officer course, which he describes in some detail, he held the rank of Midshipman and was sent to HMS Pembroke at Chatham in Kent for gunnery training and then on to HMS Lochinvar, on the Forth River near Edinburgh, for instruction about mines and minesweeping. He explains the details of the nature of these courses which lasted until the end of December 1943. After a few days leave and a short spell in HM Motor Minesweeper 84 sweeping real mines in the Firth of Forth he received his appointment to the Halcyon class minesweeper HMS Jason, of the 1st Minesweeping Flotilla, on 17th January 1944.

HMS Jason was in the final stages of a refit at Portsmouth dockyard. Brendan Maher had
already started to keep a diary and on joining his new ship the commanding officer, the
somewhat formidable Commander Trevor Crick RN, instructed him to record anything
that contributed to his training and experience in a Midshipman’s Journal. This Journal
became a valuable source document especially as he also quotes from his
contemporaneous diary and the two accounts of identical events, the official version
inspected by his captain and his private comments, are revealing.

He attended a course on shipboard administration and received instruction in codes and
cyphers as well as continuing to learn more about seamanship. HMS Jason completed her
refit by mid February after which she needed a while working up to full efficiency as
there were many new crew members. Leaving Portsmouth the journey to Scapa Flow, the
main naval base of the British Home Fleet, was uneventful as HMS Jason continued
working up although his record of the route taken is somewhat confusing. The author
continues with his daily account interspersed with brief anecdotes about naval life, for
instance as the only Roman Catholic officer he took charge of the other Catholics during
those times set aside for religious ceremonies. If they were in port he marched them to the
local church and if at anchor then he would lead a brief ceremony for them somewhere at
the opposite end of the ship.

From March 1944 whilst based at Scapa Flow they carried out a number of exercises
including gunnery, night-time minesweeping with the 15th Minesweeping Flotilla by
radar (a foretaste of things to come at Normandy) and anti-submarine exercises when he
kept the action plot. Previous record keeping in the ship’s office seems to have been
somewhat haphazard and he spent a lot of time in sorting matters out. Although he was
the most junior of the officers he was also required to carry out watchkeeping duties when
at sea and as Officer of the Day when not. By mid March they were exercising off the
west coast of Scotland and returning to moor at a buoy in Loch Alsh overnight,
replenishing their fuel from an oiler in Loch Ewe. He relates such matters as the routine
for entering and leaving harbour, the routine for the payment of the ship’s company, the
hazards of the ‘buoy jumper’, etc., explaining how each was effected.

Exercises continued into April as they gradually worked their way down the east coast of
the British Isles calling in at Invergordon, at Rosyth where they picked up new kites and
otters (for minesweeping), and at North Shields where a reception for local dignitaries
was held on board. They continued to Harwich, replenishing the ammunition stock at the
end of the month until on 30th he received a signal appointing him as third officer in HM
Motor Launch 137, then lying at Felixstowe (HMS Beehive). The following day, 1st May,
he was promoted to Sub-Lieutenant.

For the second half of the book he relates his experiences in Coastal Forces with ML137.
Motor launches were the maids of all work of the ‘little ships’ in the ‘narrow seas’ between
the British Isles and occupied Europe. They were employed on anti-submarine duties, as
convoy escorts, minelayers, mine-sweepers, air-sea rescue ambulances and on general
duties. ML137 was a Fairmile ‘B’ class vessel of 112 feet long, powered by two Packard
petrol engines, and quite heavily armed for its size with one 3-pounder gun, two twin
Oerlikon 20-mm cannon, two twin Vickers machine guns, all under the control of a ships
company of three officers and seventeen ratings.

ML137 moved down to Dover (HMS Wasp) and then to Portsmouth (HMS Hornet) in
preparation for D-Day. Their role was to work with 1st Minesweeping Flotilla sweeping
across to the French coast and Sword Beach where, with their shallower draft, they were
able to sweep closer inshore than the fleet minesweepers. They also destroyed many of
the mines cut by the other sweepers. 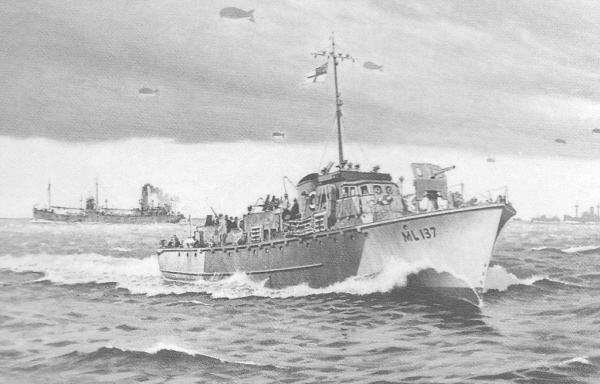 Once the bridgehead was established the ML minesweepers came into their own to help
clear any ports after capture. Cherburg was the first priority and they swept first to allow a
bombarding force to reach a position where they could destroy the shore batteries. Once
that was achieved and the port itself had been captured the harbour needed clearing of
mines but first the remaining German snipers had to be dealt with by land forces. Whilst
that happened further harbour installations were investigated and ML137 became the first
British ship to land at St. Vaast. They eventually returned to Cherbourg in July and were
able to rescue some of the survivors of the US minesweeper YMS350 which was sunk by
a mine in sight of them.

Minesweeping and convoy escort duties continued and even acting as guide to a US
convoy of mainly tugs and maintenance vessels, just arrived from an Atlantic crossing,
from the Western Approaches end of the English Channel through to Cherbourg. By
Christmas they were trying to clear the harbour of Brest and they were guests of the Free
French Navy at the naval Academy for Midnight Mass on Christmas Eve followed by
dinner. The new year saw a return to British waters and convoy duties off the east coast
and celebration of the end of the war in Europe during a refit at Teddington on the
Thames. The task of minesweeping continued even now and they were recalled to
undertake the clearance of some of the most dangerous, oyster pressure mines, from the
approaches to Rotterdam.

The sweeping procedure for oyster mines involved dropping a pattern of standard hand
grenades into the water. The grenades and cylindrical wooden blocks were loaded into a
tube which had a slit down one side enabling the removal of the pins from the grenades.
Once the tube was full the contents were rammed into the water and the grenades would
explode four seconds later. Travelling at 15 knots they would travel 33 yards in those four
seconds when another tubeful of grenades and blocks would be discharged. It had been
calculated that one load every 40 seconds would build up a pressure wave appropriate to
explode any oyster mines in the area away from the launch.

They had to load and eject the grenades with little allowance for error. On 27th June,
when on the third day of sweeping the Nieuwe Merwade, a canal in the Rhine-Meuse
delta, a misfire of a grenade threw two live grenades onto their deck and with just four
seconds before detonation they took whatever cover they could. Brendan Maher was the
most seriously wounded with a piece of shrapnel through his cheek, breaking his jaw and
embedding itself in his mouth and the remainder of his sweeping party had some minor
shrapnel wounds. Brendan Maher’s war was over but he relates his initial treatment and
surgery in a Canadian Field Hospital, his repatriation in a Dakota and further treatment at
the RAF Hospital at Wroughton and the Royal Naval Auxiliary Hospital at Sherborne
with his usual attention to detail.

After further surgery at the unit at Rooksdown House, Park Prewett Hospital under Sir
Harold Gillies, a pioneer plastic surgeon, he was eventually discharged from the Royal
Navy but remained on the reserve until 1951. By this time he was a graduate student at
Ohio State University in Columbus where he completed a Ph.D. degree and soon began
an academic career in psychology.

This gem of a memoir is a valuable record of the aspects of WW2 that it covers and one
which, for some unknown reason, does not seem to have been picked up by any publisher
for a British edition. It was published by the Naval Institute Press of Annapolis, Maryland
in 1996. Well worth the read.