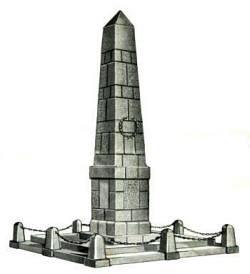 Recently a neighbour, knowing my interest in local and military history, showed me a programme for the dedication of the memorial to the 716 Lowestoft men killed during World War One. The sadder thing still about the memorial, apart from the fact of its need in the first place, is that the names of the fallen are not displayed.

I hope to compensate for that omission by reproducing the names from the dedication programme on a sister site ‘Old Lowestoft’ where I display local ephemera. Just completed are scans of each of the 20 pages of the programme, 14 of which record the names, numbers, ranks and in most cases the unit and very brief details of how they lost their lives.

The memorial was unveiled on 11th August 1921 by Admiral of the Fleet Lord Wester Wemyss as part of a brief ecumenical service of dedication and was followed by the placing of wreaths by the families and friends of those lost. The names are contained on a Roll of Honour which lies within the memorial under the East panel marked with a laurel wreath.

I don’t know if many of these souvenir programmes have survived but it is the first copy that I have seen. For full details…